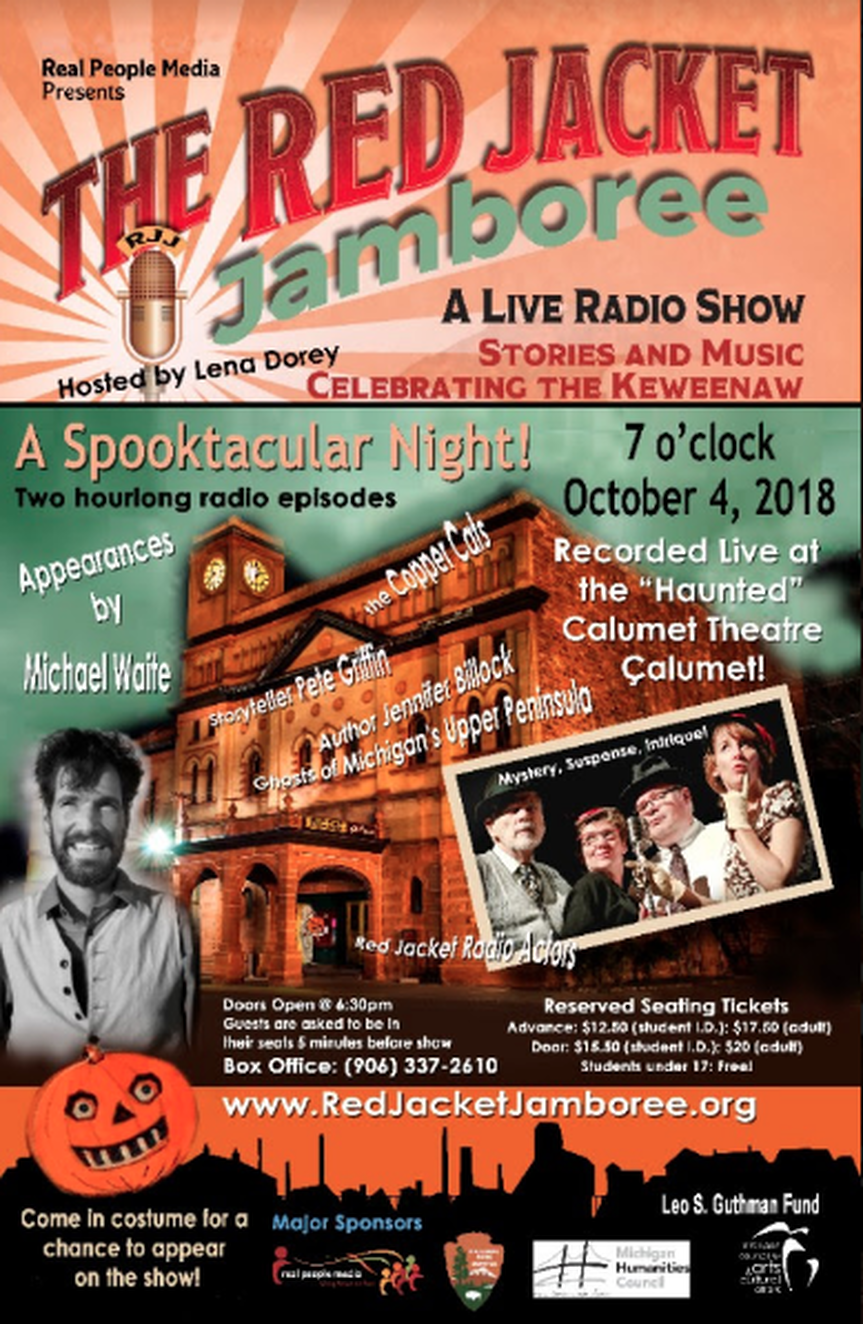 Singer-Songwriter Michael Waite and storyteller Pete Griffin will be the featured guests at the October 4th performance of The Red Jacket Jamboree, a new old-time radio variety show showcasing stories and songs from the Keweenaw Peninsula. The show is performed/recorded in front of a live audience at the historic Calumet Theatre in downtown Calumet. Two hourlong radio episodes are recorded per performance. The annual Halloween show promises to be “spooktacular” with tales and hauntings from Michigan's Upper Peninsula.

Michael Waite
Michael Waite's songwriting is thoughtful Americana without any glitz, both brutally and joyously honest. He lives with his family in the Huron Mountains north of Marquette and draws from a repertoire of hundreds of songs ranging in style from Irish folk to bebop to popular hits. His delivery of his own songs and interpretations of others is influenced by his first musical exploration, the jazz trombone.

Pete Griffin
Nicknamed the Storytelling Ranger, Pete Griffin has been sharing his stories with thousands of people. Pete grew up in Cedarville, Michigan before moving to Alaska in 1992. He worked for the US Forest Service as a wildlife biologist and District Ranger until his 2010 retirement. Described as the “Storytelling Ranger” (as well as the "voice of the Tongass"), he's been telling personal stories about life that incorporate natural history, leadership, and learning for years on radio. He's performed in Los Angeles, Richmond VA, Jonesborough TN, on board Disney and Princess cruise ships as Alaskan Naturalist on dozens of Alaskan cruises, and at libraries, schools, and museums between Alaska, Hawaii, and Michigan. Pete is a member of the National Storytelling Network and was selected as one of the Showcase Performers at the 2017 National Storytelling Conference.

The Red Jacket Jamboree, hosted by Lena Dorey, also features humorous sketches performed by the Red Jacket Radio Actors, poetry and musings by Martin Achatz, the Poet Laureate of the U.P. and a wide range of music performed by the Copper Cats, the stage band. The band consists of Jerry Younce on guitar, Bill Carrothers on piano, Harry South on bass and Carrie Biolo on percussion.

The Red Jacket Jamboree is produced by Real People Media, a nonprofit helping people share their stories through literary, visual, performing and media arts. The program is funded in part by the Leo S. Guthman Fund, the Michigan Council for Arts and Cultural Affairs, Michigan Humanities Council, and Philip and Marlene Glotfelty. The show receives additional support from the Keweenaw National Historical Park. The next show is Thursday, October 4th at 7pm. The audience is asked to be in their seats 5-10 minutes before the show. More information at www.redjacketjamboree.org. Tickets available at www.calumettheatre.com or by calling the Calumet Theatre box office at (906) 337-2610.
​The Copper Cats

Jerry Younce - guitar  (musical director)
Younce, a professional guitarist, has performed Jazz, Rock, Top 40, and Country music in show bands and various musical groups during his 30+ year career as a musician.  When not performing at The Red Jacket Jamboree, he performs with his son in Younce Guitar Duo, an acoustic improvisational collaboration inspired by jazz, fusion, and world music. Born and raised in Detroit, he started his professional career performing in Jazz bands around the city.  He has called northern Michigan home for the past 30 years. View video of Younce Guitar Duo.