THIS SHOW HAS BEEN RESCHEDULED TO SUNDAY, SEPTEMBER 25 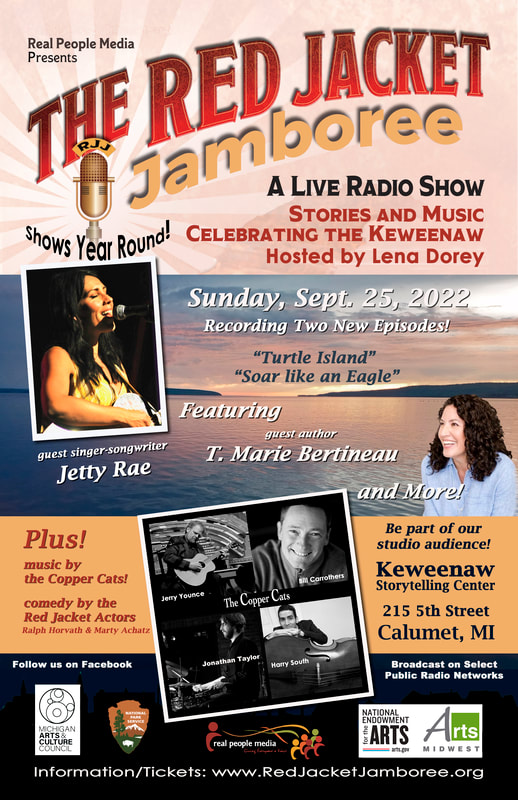 Singer-songwriter Jetty Rae returns to The Red Jacket Jamboree! The repeat performer  is known for her powerful and melodic voice that's just right for bluesy folk rock. Taking moving and meaningful lyrics and adding equal parts soul and indie rock, Jetty carries her audience to a depth that few artists can. You can also hear Jetty's music in a number of TV commercials for brands such as Microsoft, Petco, Ben & Jerry's and more.  Jetty Rae adopted the name of her grandmother who was full-blooded Karuk (a Native American tribe). Jetty will help us celebrate that heritage as well as that of Michigan's indigenous people's.
​

Storyteller/Author T.Marie Bertineau
Born amidst the copper mining ruins of Michigan’s Upper Peninsula, T. Marie Bertineau is of Anishinaabe-Ojibwe and French Canadian/Cornish descent. She is a member of the Keweenaw Bay Indian Community on the L'Anse Reservation, migizi odoodeman. Her work has appeared online with Minnesota’s Carver County Arts Consortium; in Mino Miikana, a publication of the Native Justice Coalition and Waub Ajijaak Press; in the annual journal U.P. Reader; and is anthologized with the Chanhassen Writers Group of Minnesota. Married and the mother of two, she makes her home in the Great Lakes Region.
An old-time radio variety show sharing history, music and stories of Michigan's upper Peninsula. Educational and entertaining for the entire family